Rolling 20 or Wait the Roof is on Fire

Holidays were quite busy so I will be pumping these few sessions out consecutively to catch up.

Here the RODs continue their journey, but not how we expected. The drunken Sorcerer Daryl decided that he and RODs was not down to stop a village being raided by Kobolds. That is beneath them, instead they decide they want to visit an old friend, Gi (guy gui, idk anymore). Everyone huddles up and they teleport all the way to the village they last seen Gui in. This was a nice jungle type of village where it seemed the residents lived in peace with the various animals, who Stug will get to know later. As they make their way around this village they enter a monestary. As they advance to the front they notice someone hanging from the ceiling. The being drops down with a gorilla style leg. He pulls his cowl and we are now reunited with Guy!

The group reminisces of the past and also what happened with Gui and his leg. Stug seems very impressed and wants one of his own. He also tries to encourage Gi to give up his message stone but things just don't happen. The Group is invited to Gui for dinner but are invited to check out the village until later that night.

Stug decided to stick with Guy (who was his original character in this game) while the rest went to explore the village. It didnt take long for the group to find a bar. Volkorn meets the twins, Dranas just gets shit faced, and Daryl seems curious of a man passed out on the bar room floor. Daryl goes to check on him with a slight of hand, to find a ring and a key. The key is pocketed. A tall emo chick with magnificent bewbs comes in after Dranas runs off. She is interested in the man laying down. Daryl is curious decides to pry and find out that there is disgust and some hatred towards this man.

Volkorn eventually leaves with the twins but decides he likes 1 over the other and goes to her home.After a night of hot passion Volkorn is woken up to a blazing fire in the womans home. With quick thinking he rushing over to his items then starts to try and put the fires out but must retreat.

I must say, I really enjoyed the roll20 experience, you have to keep on it though with this group. Its something I wouldn't mind trying again in the future. 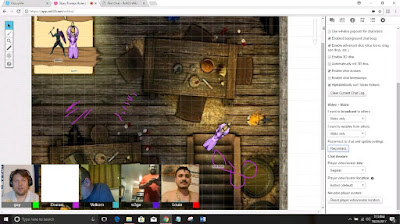